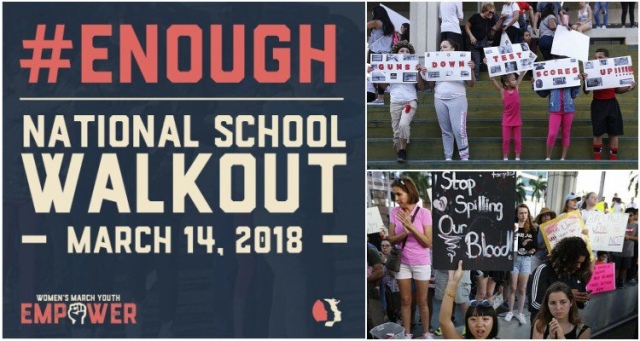 As students walkout nation wide to protest inaction of authorities on gun violence today, we stand in solidarity with them. For the sake of my kids, my neighbors’ kid and kids everywhere in the US, I hope that something gets done.

Exactly a month ago, 17 hapless people were killed in a school shooting in Florida. It was heartbreaking! Really, Enough is Enough!

I salute the spirit of these kids as they protest for a great cause👍. #NationalWalkoutDay

I was pleasantly surprised to notice this paper in my son’s folder. See how the class teacher (Mrs Abrahamson, First Grade) has circled the best ‘S’ in the handwriting page instead of pointing out at not so good ones. What a small yet enormously effective way to reaffirm positive behavior! And what we do is the other way round – find faults and punish. Simply loved this and learnt from it!

Hope this letter finds you good. I felt an immediate need to write to you after visiting your facebook profile via our common friend’s profile. I was looking for a tall, gawky person but saw a different man there – aged with lined face and a pot belly. I was aghast! There was no sign of the boy who would enter the classroom bustling with energy, taking on the world in his languishing stride.

It seems as if time has flown since I last saw him after our board exams (Kabuliwallah syndrome… remember the story?). We were sixteen then… fresh and so full of excitement to take on the world. I had half expected to find the same boy and initiate a chat with him. But for the first time, I experienced how much the world has changed… how much I have changed! In a flash, I felt being transported from teenage years right into my thirties.

He and I studied together from kindergarten till tenth. Although, we were never best of friends! Infact, I remember the boy was mean to me a number of times and I myself was not a model of good behaviour but we were comfortable around each other. I also visited other classmates via your profile but everyone has changed. Most of us have put on weight, have moved to different places, undergone varied experiences. Life truly has taken a toll on us.

I tried hard to find some semblance, something of the past in your picture but …I gave up.  You looked comfortable around your family…a typical man of the world who goes to work in the morning, returns home tired and waits for dinner to be served at night. Your wife is beautiful and kids are cute. One of them resembles you. I am glad life has been good to you. But again, you are so unlike him. He was fidgety and non-conformist. You are a stereotype family man!

He was ambitious, boisterous and haughty but you seem to avoid confrontations. He questioned everything and you seem to accept everything. I like that you are happy and settled but I liked him better – my happy go lucky classmate who would make the class laugh with his pranks. He was non predictable and creative, you are adjusting with what life has offered you. Good for you!

I smile thinking that once upon a time,  my classmates were an intrinsic part of my world. I had enjoyed their encouragement and would take any discouragement to heart. Many a times, they were harsh and judgemental.

My classmates held the power to make or break me. I didn’t know then that all this would change so drastically. And that I would no longer have to compete with or conform to anyone’s notions. It felt good when I moved on from teenage angst towards maturity but in the process, I took you all for granted. I had never thought I would never find you all ever again…not in the same way.

I get nostalgic remembering the last parting image of my classmates – excited bunch of boys and girls who loved to chat,  bitch, scream and dream. Where did they all go?

Lately, some of you crept into my memory and reminded me of those sweet-sour school years. Perhaps, wanting to re-live the past encouraged me to visit your FB page.  I wanted to meet you all and have a chat online. But I guess…I have lost the connect.

If my letter encourages you to find him – the gawky teenager, somewhere deep within you, then kindly let him know that I am thankful to him for being a part of my childhood.

May be, my letter would make you  curious and you would want to check back my profile. But I warn you – you will hardly recognise me – a married woman with kids. You would not know what to say to me.

But perhaps if you let that tall boy visit my profile, he might find the quiet girl who loved doodling and reading. They will connect, have great conversation and laugh together like youngsters do. Please find and send him once for I am sure we all miss the innocent, musical laughter of our wonder years! Then, may be we will reconnect again with our past.

Best wishes for everything,

I was in college at the time I became an eyewitness to a brutal murder in Patna, Bihar (India). It happened late in the afternoon on a hot July day. I was standing in the balcony, comparing notes with two of my friends in our privately owned hostel. Down, the busy street was bustling with life. Nobody knew, it was soon to go deathly quiet.

We were in the middle of a conversation when I saw a man running like a mad person. He looked poor and distraught. But my inexperienced eyes led me to think differently. I watched him being hounded by two men on a bike, and thought they were having some kind of youthful fun.

One of them was wearing a green shirt and black pant and he had a gun pointed at the poor man, who was trying to flee. I thought it was a toy gun and looked on with interest.

The men on bike laughed uncontrollably. Next moment, the young man in green shirt, fired incessantly at the poor man. With disbelief in his eyes, the poor looking man fell bathed in blood. My dream reverie broke with jolt. Like an idiot, I had comprehended very late that I had been witnessing a murder.

My two friends rushed down the stairs to escape and one of them fell down the stairs hurting herself badly. Before I could respond in any way, the murderers laughed heartily before leaving the spot in their shining bike.

No one touched the poor man as he bled to death. We were locked inside the hostel and the street went deathly quiet within seconds. Not a soul came to help out the man or even offer a kind hand. It was heart breaking…heart wrenching…horrible, to say the least! I had never felt so much ashamed of myself as I helplessly watched him dying on the street from balcony.

After a few moments, a brave lady ( I still don’t know whether she knew him or not) coerced a rickshaw puller to put the body on his rickshaw. Together, they lifted him on the rickshaw and perhaps carried him to a hospital. The police came, ostensibly questioned a few people and left.

We students were distraught and a few of us cried for hours ( I am sure my friends will relate to this, when they read this). I remember not sleeping for days. But I consoled myself with the cowardly argument that we were locked from inside, so we couldn’t have possibly done anything.

Later, we learned that it was a case of road rage. The man was a servant somewhere and he had chastened the young men on bike, when they had shown agression on road. This speaking out against injustice had cost him his life. I thought about his dependants and felt worst.

We also learned that although there were more than 100 witnesses to this murder, the politically strong murderers remained free men.

Soon, life went on as usual and the street bustled with life again. All common people including us, comfortably forgot about the murder, and tried to erase the tragedy from our minds as it was safer to be mum in those days.

Those were RJD days in Patna, with supremo Lalu Prasa Yadav at the helm. Everyone lived in constant fear as hooligans crawled the streets. Justice was a joke at the time. We never felt safe in those days as crime against women was rampant.

RJD is back in Bihar and power is being shared by Lalu Prasad Yadav and Nitish Kumar. I fear that the murderers would be back in the streets of Bihar, making a joke out of law and order. I fear that Nitish Kumar would fail to check Lalu’s ‘jungleraj’ due to the coalition government. I fear about so many big and small things as my family and relatives live in Bihar…

The poor man never got justice, and as witnesses we were all partakers to the crime. I had tried to erase the image of his writhing blood stained body from my mind but it keeps coming back. The image came back to haunt me again after the Bihar elections.

Mental Health and Well Being

He who has no attachments can really love other, for his love is pure and divine