It is time again for Mondays Finish the Story challenge by Barbara Beacham. Here is the picture prompt and the link: 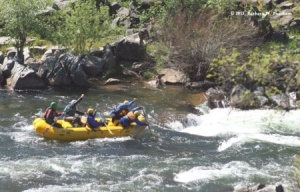 “When the team heard the dam explode, they knew they had limited time to make it to safety.” PAUSE!!! The baby hit the pause button on the remote, so, the film stopped.

I tried to take it from him but too late…he had dropped it behind the heavy sofa. I sighed and he gurgled.

Squatting on all fours, I tried my best to retrieve the elusive remote…my mind still on the thriller. I wished the team could make it to the shore..Or the hero’s family would be shattered.

Somehow, I retrieved the remote but the TV had auto switched off. I wanted to restart but the baby had a messy diaper and he started wailing. The stupid part was I didn’t remember the name of the film or the channel.

The film was no longer there on any channel when I switched on the TV. I missed the exciting film. But, I am sure, you readers might have some ideas..why don’t you tell me what happened next to the rowers?

Follow Stories by Shivangi on WordPress.com
Join 3,171 other followers

(P.S. – My older and little brother took over mom’s blog and they helped me put together and publish this version of “Paw Things”)

Interviews, reviews, marketing for writers and artists across the globe

Create A Better Version Of Yourself

An experimental teller of relatable tales!