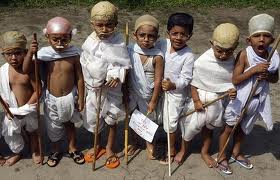 Mohandas Karamchand Gandhi is imbibed in the consciousness of every kid through his teachers, books, parents, relatives, television, radio, roads, buildings….the list is endless. He is the first great leader Indian children know of, of course Shah Rukh Khan, Salman, Sachin follow queue. But every kid meets Gandhi first and is expected to be a hero like him. Small wonder then that in almost all the school fancy dress competitions, you will find a little Gandhi, with round glasses and shaved head.

We moved to Minneapolis when my kid was small. So, he could not be familiar with the famous old man. But today, he gave me a great perspective on him. When I tried to teach him about the Father of India, he said, “O! I know him. He wears Harry Potter’s glasses.” I laughed out aloud and told him he got it right. Yes, our Gandhi is international and same goes for Harry Potter. Here is something I found on Gandhi’s glasses.

To quote Amar Prabhu from quora.com – “The glasses of Gandhi have a fascinating history. Gandhi bought his first pair in 1890s when he was in London. However, he did not use them extensively and they were more of an accessory. Everyday public usage of his iconic glasses started in November ’21 during a fast in Bombay, when he was protesting communal rioting. It was during the same time that he decided to give up Western clothes and resorted to wearing khadhi (cloth he made himself). He started shaving his head as well.

During Gandhi’s time, glasses were steel rimmed and built to last, and the lens was made of glass—it had to be ground on a abrasive surface to fit the frame. This grinding required skill and fine tools. Round glasses without any drastic changes in curvature or sharp corners are easier to grind, which is why round or oval frames are popular instead of shapes with well defined corners for frames which use glass lenses.

While the exact reason is unknown, it must be the simplicity of this design coupled with the popularity of the frame at the time (it was fashionable in 1900s) that led the Mahatma to choose this design.”

Whatever may be the reason but Gandhi made those glasses iconic. His whole demeanour emanated purity, simplicity and peace. And behind the round glasses were the eyes of an immensely wise old man, who showed the world how to win in a non violent and truthful way.

Mahatma Gandhi may had been assassinated today in history, in the year 1948. But his ideals and values live on in big and small things like…of course…Potter’s glasses.